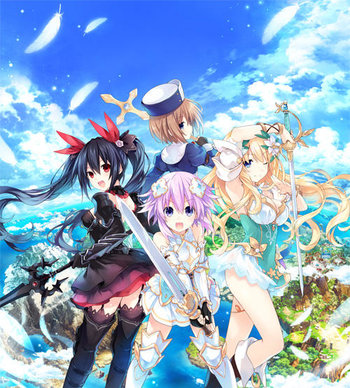 And you thought this series couldn't get any more Meta.
Advertisement:

Cyberdimension Neptunia: 4 Goddesses Online is an Action RPG featuring the Neptunia cast as they play as themselves in an MMO. The sixth Spin-Off game of the series (the fourth spin-off title to be developed by Tamsoft), and the second title of the franchise to be developed for the PlayStation 4. Notably, this is the first game to be using the Unreal 4 engine, thus boasting a significant visual difference to its predecessors.

The game's premise is that the world of Gamindustri is relatively peaceful after being saved numerous times by the goddesses and their friends. During this time of peace, the four goddesses of Gamindustri have been invited to participate as beta testers in the popular MMORPG Four Goddesses Online, where they themselves are actually featured as official character models.

The MMO takes place in a fantasy setting known as Asgard, with the towering World Tree being most notable landmark in the world. And as the four first log in they are greeted by the game's guardian character responsible for advising new players, Bouquet. Learning from her that they are supposedly the "Chosen Ones", and that the world of Asgard is in danger from the Demon Lord.

To save the world, encounter their other selves, make new friends, and get little sisters, filled with thoughts in their hearts, the goddesses will step foot into the Cyber Dimension.