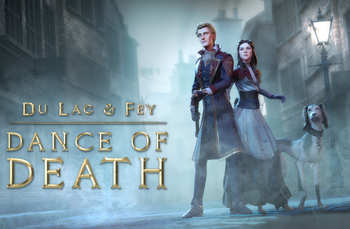 "...Which, I am afraid to say, is the cause of much of the wrongdoing we see upon these very streets. We have forgotten who we are."
— Mr. Whittock
Advertisement:

Dance of Death: Du Lac & Fey is an Adventure Game developed by Salix Games, and released on PC through Steam on April 5th, 2019.

The time of King Arthur is long past, but due to some strange magic, Lancelot and Morgana still walk the streets of Britain. Now they work as investigators, hunting down the many criminals and demonic creatures that prey on humanity. Their latest quarry is a London serial killer called Jack the Ripper.

Meanwhile, Mary Kelly strives to make ends meet in her Whitechapel home. She hopes for enough rent money to last out the week...and perhaps a cure for those strange dreams she's been having. Unfortunately, she is soon swept up in Du Lac and Fey's investigation.