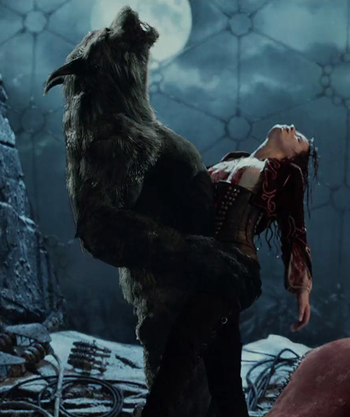 "Howl, howl, howl! O, you are men of stones!
Had I your tongues and eyes, I’d use them so
That heaven’s vault should crack!"
— King Lear

When a character howls or screams in a raw, somewhat primal fashion to express their grief and anguish. Obviously, it's done most often by canines, but not limited to them.

Can overlap with Clifftop Caterwauling, when this is done at the edge of a cliff, as well as Skyward Scream. Similar to Big "NO!" and Death Wail. See also Wolves Always Howl at the Moon and Howling to the Night, for other howling tropes. Compare Cathartic Scream.