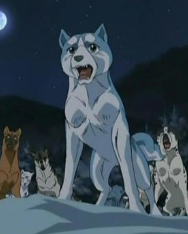 Balto? Lassie? Pfft. These guys would embarrass them all.
Advertisement:

A manga/anime action/adventure series by Yoshihiro Takahashi about dogs who follow a rather bushido-esque code of fighting and loyalty. The series has drama, swearing, and gore.

Ginga Densetsu Weed (Silver Fang Legend: Weed) is a sequel series to Ginga: Nagareboshi Gin, serialized in Weekly Manga Goraku from 1999 to 2009. Taking place 10 years after the events of Nagareboshi Gin (some translations give it as fourteen years, but if you use dog years, then everyone's happy), Weed, the son of Gin, must fight to save the father he's never met from Hougen, a Great Dane that threatens his father's paradise. This series was adapted into an anime in the early 00s, starting to air on Animax in 2005. The manga ended at the total of 60 volumes in 2009.

Popular enough in Scandinavia and Finland to produce a complete series DVD box release. Considering the amount of cursing and blood coming from dogs, America is not likely to see a dub anytime soon. You can dig the fansubs up from somewhere, though.

No, Weed isn't what he's smoking. Also not to be confused for Legend of Galactic Heroes AKA Ginga Eiyuu Densetsu.

Tropes used in the animated adaptation:

Tropes used in the manga: