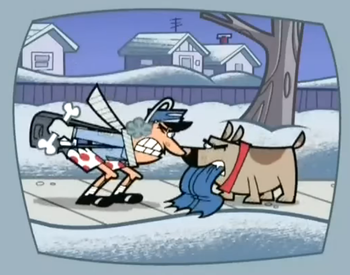 "Why do we bark at the mailman? Because by George, we cowdogs have always barked at mailmen, and we always will!"
— Hank the Cowdog
Advertisement:

Mailmen are courageous and unstoppable. Nothing stops them from being able to deliver letters and packages to the masses. Not even the neighborhood dogs, no matter how hard they try.

Like cats and squirrels, mailmen are often portrayed in fiction as a dog's favorite target. Mostly it's harmless encounters like barking or chasing them away. Other times, because Predators Are Mean, the Angry Guard Dog outright attacks the letter carrier. Sometimes the mailman gets his revenge or the dog gets his comeuppance, especially if the mailman has a dog of his own to counter back.

Sometimes instead of the mailman, the target is a paperboy. In older media, one may see a milkman or a telegraph deliver as the target of the dog's wrath.

Played for Laughs if the mailman is intimidated by a comically small dog like a chihuahua. (Though if it's a particularly poorly trained and aggressive small dog, this might be a Justified Trope.)

This is Truth in Television, as mailmen routinely enter and leave something in the territory of very territorial animals in Real Life.