The time has come for dogs to rule the wild. 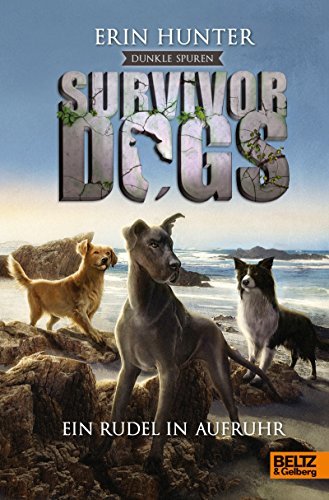 Survivors is the third series from the bestselling author Erin Hunter (actually several authors working under the same pen name), after Warriors and Seekers. Instead of being written by the original Erins, it is instead written by new authors using the Erin Hunter Pen Name.

The series begins with the not-so-lucky Lucky in the pound. Not long afterward, an earthquake destroys the building, and Lucky escapes into a world where it appears that all the humans are gone. He has always been a Lone Dog, fending for himself and relying on his instincts, and he's happy to remain that way. But then, after being rescued from a sticky situation with a gang of foxes, he realizes that the dogs who saved him are led by his sister. He realizes that being in a Pack might be safer, but he also quickly comes to realize that these former pampered pets probably won't make it without someone teaching them how to live without humans. Relying on other dogs and having them depend on him brings new dangers that Lucky isn't prepared for, but he may not be able to survive on his own. As the dogs travel to safety, they must learn how to become a true Pack.

The books have ended and consist of two arcs. The books released are:

As with the Warriors novellas and books showing those novellas, the Survivors series has three novellas: Alpha's Tale Sweet's Journey, and Moon's Choice. All three of them are released in a paperback book called Tales From The Packs.

Not to be confused with Survivor.