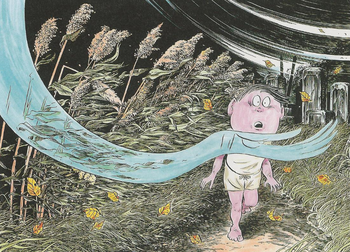 For millennia, wind has seemed mysterious. You can't see it, but you can feel it and sometimes even hear it. Some cultures attribute supernatural forces or divinity to the wind. One instance of this is that wind carries the spirits of the deceased.

This is Older Than Feudalism. Many cultures throughout the centuries have associated the wind with the supernatural. The word "spirit" is even derived from "breath"/"blow". This is still seen in words like "respiration". Even in the Latin language, and other languages too, there are links between the idea of breathing, wind, and having/being a spirit.

Compare to Stars Are Souls for another natural phenomenon associated with the afterlife and Healing Winds for winds having a health-giving element. See also Chunky Updraft when the source of the wind isn't paranormal.