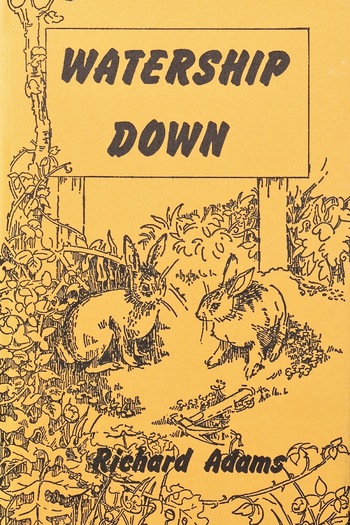 First edition cover
And Frith called after him, "El-ahrairah, your people cannot rule the world, for I will not have it so. All the world will be your enemy, Prince with a Thousand Enemies, and whenever they catch you, they will kill you. But first, they must catch you, digger, listener, runner, prince with the swift warning. Be cunning and full of tricks and your people shall never be destroyed."
—Lord Frith, "The Blessing of El-ahrairah

Hazel, our protagonist, is a youngster scratching a living as best he can on the outskirts of society. He also looks after his little brother, Fiver, a fragile soul prone to odd hallucinations. After Fiver has a vision of their hometown being destroyed, Hazel gathers a group of sympathizers and they set off for a new home after a brief but futile attempt to convince the town's leaders of the danger. Notable among Hazel's new followers are Bigwig, one of the community's elite enforcers; Dandelion, a very fast runner; and Blackberry, a genius capable of grasping high-level concepts like crossing water without having to swim by sitting on something that floats.

Because, see... Hazel and his fellows are rabbits.

Yes, rabbits. Bear with us for a moment.

These are not humans in rabbit form. They live and think like fragile prey animals. Caution is a way of life because death is a moment-to-moment possibility. They can't count past four because they only have four paws (Fiver, the runt of a five-kit litter, gets his name from the colloquial of the Lapine word hrair, literally meaning "uncountably many" or "a thousand"). They think hrududil (cars and other large machinery) are some type of animal. They don't understand visual art, or human speech, or any of the strange things humans do.

Only Blackberry, Fiver, and Hazel can really "think outside the hutch," as it were. Hazel in particular quickly realises that survival as a tribe of hlessil (nomads) will require atypical problem-solving and teamwork, and thus becomes the de facto leader of the group, with a particular talent for bringing out the best in his followers and earning their loyalty in return.

Their journey is long — for a rabbit (about five miles), and it is punctuated by times of rest, during which they encourage each other with tales of their Folk Hero, the first rabbit: El-ahrairah, the Prince With a Thousand Enemies. El-ahrairah is a Trickster hero (meet us halfway between Beowulf and Bugs Bunny and you've got the idea), and the legends we hear deal with everything from the rabbit's creation myth to El-ahrairah's descent into Inlé to meet the Black Rabbit. Don't think that the stories are separate from the action, because they build up an intricate belief system that rewards us with major character moments, up to and including the very end of the story.

The novel proved so popular that, decades later, Adams wrote a set of sequel stories. Called Tales From Watership Down, the stories actually take place during the original novel, though after the resolution of the plot. Two thirds of the book are a mixed bag of new Lapine mythology (ranging from Eldritch Abomination to Cloudcuckoolander tales, including a new one with a Woundwort Expy). The final third expands the Watership warren's post-battle history, which had previously just been given a brief mention in the original Epilogue. They include what became of Hyzenthlay, the formation of the new Watership-Efrafa joint warren (and its salvation from a pack of roving weasels), and what happened to Campion and Efrafa after Woundwort.

Also notable is the 1978 animated feature film based upon the book, directed by Martin Rosen. (Its page is here.) It's a very well-done adaptation, and well worth watching. The insanely detailed animation fits the story perfectly, and real effort is made to respect the seriousness with which the rabbits take their quest. The film is also well-known for how gritty and violent it is, far more than most animated films. Likewise notable is its voice cast, consisting of some of the best British actors of the day, including John Hurt as Hazel, Ralph Richardson as the Threarah, Nigel Hawthorne as Campion, and Richard Briers as Fiver. The American character actor Zero Mostel voiced Kehaar the seagull. Also featured is Art Garfunkel's song "Bright Eyes", written for the film. As of 2015, the film is now a part of the Criterion Collection.

From 1999 to 2001, a Lighter and Softer TV series adaptation was broadcast on British and Canadian television, made in collaboration with Canadian network YTV. The series revolves around Hazel and his friends trying to settle down and protect Watership Down from outside threats and natural disasters. While this version was made for very young kids, it was praised for its mature story telling and world building, and also had an All-Star Cast with actors such as Stephen Fry, Kiefer Sutherland, Stephen Mangan, Richard Briers and even John Hurt, this time playing General Woundwort. The show also uses an instrumental rendition of "Bright Eyes" for its opening and ending credits. Its page can be found here.

In 2018, Netflix and BBC One produced another animated adaptation, a four-part CGI miniseries with an All-Star Cast of its own. Its page can be found here.

The cult tabletop role playing game Bunnies & Burrows was inspired by the book.

open/close all folders
All versions
Novels
Lapine mythology
As an aside, only Dinotopia has gotten even close to using as many Animal Tropes as this novel.

Alternative Title(s): Tales From Watership Down