Two Roads Before You 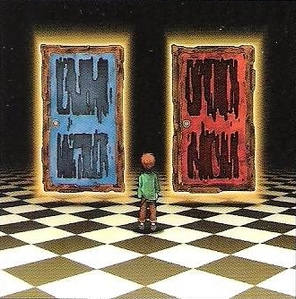 Choose wisely.
"You've got two roads before you: One is the path of righteousness, where you carefully walk the road to the light—the direct route. That's your merry co-op play. The other is the path of heresy, searching for power along the path to darkness—the indirect route. Single player. It fits a shut in—uh, lone wolf like yourself."
— Jack Rakan, Negima! Magister Negi Magi
Advertisement:

The Hero is confronted with a choice between two mutually exclusive paths. Sometimes it's the choice between good and evil, law or chaos, or even just choosing between fire magic and ice magic. The point is, only one path can be taken, and there's no way back.

The point of this trope isn't the choice; it's the act of presentation. As long as someone is presenting the choice as if the options are mutually exclusive and important to the character's life from then on, it doesn't matter what the choices are or who is presenting them.

Shows up in video games quite often, even in games without a Karma Meter.

See also Sadistic Choice and Take a Third Option. Has some symbolic relation to At the Crossroads, though don't confuse this trope with that one as this one is about metaphorical forks in the road of the plot. Super-Trope of Red Pill, Blue Pill.

Note that this trope can apply to events with more than two choices, so long as they are all still mutually exclusive.

Spencer tries to help Carly decide whether to stay at Ridgeway or switch to Briarwood.

Spencer tries to help Carly decide whether to stay at Ridgeway or switch to Briarwood.