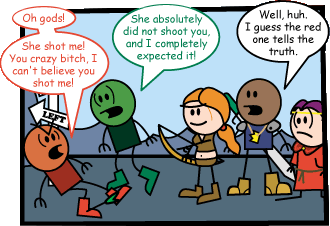 "And over there we have the Labyrinth guards. One always lies, one always tells the truth, and one stabs people who ask tricky questions."
— xkcd, "Labyrinth Puzzle"

So the heroes are crawling through a dungeon, or infiltrating the Evil Overlord's Supervillain Lair, or popping down to the shops for some milk or what have you, when they come upon a pair of doors, or a fork in the road, with each path guarded by a heavily-armed soldier (or animated statue, or whatever). They're somehow informed that one door leads to a truly inescapable Death Trap, while the other leads the way they're going, and they have to ask the guards which door is which. Usually the solution requires that Only Smart People May Pass, although some instances require that Only Idiots May Pass and can be overcome by Obfuscating Stupidity.

The trick is, one of the guards always tells the truth, the other guard always lies, and the heroes are allowed to ask only one question.

Sound familiar? This is the popular Knights and Knaves logic puzzle. The Trope Namer is a particular version by mathematician Raymond Smullyan, but the puzzle considerably predates him. Invariably the scenario used every time in the media is Smullyan's, to the point that the version is a Dead Horse Trope. If you're lucky, the puzzle will spring for a bit of originality and involve a third guard who alternates between telling the truth and lying (or worse, a "normal," who can do either or neither at will). Smullyan himself invented dozens of variations, and would probably be disappointed that it's just this one that ever gets cited. Also, it requires that the two guards are indeed a liar and a truth-teller. Some examples (such as Yu-Gi-Oh!) have it turn out that neither guard is to be trusted as far as you can throw them.

For the record, the most common solution to the above scenario is to ask one of the guards, "If I asked you if the door you're guarding leads to where I want to go, would you say 'yes'?" If the guard says "yes", then you go through his door; if he says "no," you go through the other guard's door. This is because his answer to this question doesn't depend on which guard he is. Say he says yes to the question. If he's telling the truth, then he would say that the door leads to where you're going, and thus, the door will lead to where you're going. If he's lying, then he'll have to lie about whether he'd say Yes to the question (which, in this case, he would not say yes if asked if the door led to where you're going, and would in fact say no) and, thus, is forced to give the correct answer to where the door goes. Of course, this requires that both guards know where you are going, and that neither of them considers "Your doom" a place. And interesting property of this solution, as opposed to the "other guard" solution, is that it even works if one guard is missing.

Note that if a character in these puzzles is said to always lie, then it is (probably) Not Hyperbole, unlike in real life. Real life "liars" are intending to make people trust them, and thus are perfectly willing to at least occasionally tell the truth. One of these guys, on the other hand, will be Lawful Stupid, Chaotic Stupid with regard to the habit of lying, and thus can be caught out as depicted in the picture, or by less violent means. However, note that one of the keys to this puzzle being a puzzle is that you have to get a piece of information out of these two guards, rather than just determine which one is lying, which is what prevents you from simply asking them what 2+2 is.note  This is actually the solution - asking a trick question - to a much rarer variation of the puzzle where you have to determine identity alone of liars and truth tellers. In addition, it is impossible to know who the liar is by asking him, as he would always lie about his being a liar. Some works can forget this, and make the hero look like something of an idiot for going for needless complexity instead of Cutting the Knot.

It should also be noted that no author (except those of logic puzzle books) ever includes a more complicated or different version of the puzzle. Smullyan created numerous permutations of his own puzzle, including one with islanders who answer only "Da" or "Bal" instead of "Yes" and "No," and the point is to figure out puzzles without necessarily knowing which means what in English. Another is set in Transylvania, where people can be either sane or insane (insane people believe untruths) and either a human or a vampire (humans say what they believe is true, vampires say what they believe is false). Most often writers can be excused for not including these more difficult ones, as they would be very difficult for the audience to understand. Not that we would mind.

Heroes who have neither the patience nor aptitude for logic puzzles generally just skip straight to the violence when confronted with this one. Of course, the puzzle was "meant" for people for whom a pair of armed guards are a formidable obstacle, rather than for your standard Action Hero (if the guards aren't monsters or supernatural/divine creatures far beyond any mortal's reach, of course). In video games, it can also be brute-forced by Save Scumming.

Not to be confused with Knight, Knave, and Squire.

The real question is, was the guy who explained the rules telling the truth or lying?

It's not a good idea to pull this trick on a drunk Ordo Xenos Inquisitor.

It's not a good idea to pull this trick on a drunk Ordo Xenos Inquisitor.