Series / Once Upon a Time in Wonderland 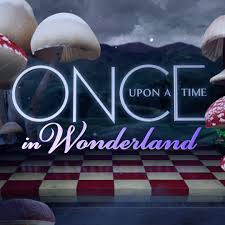 A Spin-Off of ABC's Once Upon a Time, which aired for one season in 2013-2014 as a self-contained storyline. This series focuses on Alice, a young woman from Victorian Britain who apparently traveled to Wonderland and back, but nobody believed the fantastic stories she told. Just before an attempted procedure (implied to be a lobotomy) that would have her forget it all, the White Rabbit rescues her and says that they can help her reunite with a genie she rescued and fell in love with.
Advertisement:

Rather than being distantly related to Once Upon a Time, it has a Shared Universe. Given that Wonderland stars a protagonist from Victorian England (Alice), whereas Storybrooke has a protagonist from modern-day New York, it was up in the air how connected the two series would be. Word of God tells us that they avoid a Timey-Wimey Ball in that Alice's Victorian Britain is a separate story world, like that of Frankenstein in the parent show. Several significant characters cross-over, but only in backstory. Apart from cameos and flashback cross overs, Wonderland is its own self-contained Hero of Another Story.

Despite a few characters being left with open fates at the end of the series, the show is wrapped up in its single season. Michael Socha briefly reprised his role as the Knave of Hearts as a regular in the fourth season of Once Upon a Time.

Once Upon a Time in Wonderland

The opening is just the title surrounded by mushrooms.

Once Upon a Time in Wonderland

The opening is just the title surrounded by mushrooms.