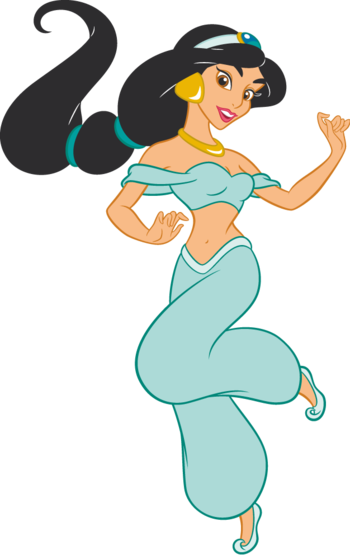 Her part of the world is known for its modest clothing.
Advertisement:

The bedlah (which simply means "suit" in Arabic) is an Arabian-influenced belly dancing costume which was actually popularized by English artists in the 19th century, but became so closely associated with belly dancing that it was adopted by real-life dancers.

Bedlah costumes will vary depending on the work, but there is a general emphasis on showing skin. A bare midriff is more or less essential; a low neckline (sometimes impossibly so) is optional. Many variations include large amounts of sheer material, generally to display the legs as well. The bottoms might be "harem pants" instead of a skirt or wrap. Sometimes the outfit will be topped off with a little veil that covers the lower half of the face.

Today, the bedlah has become the standard costume for female characters in "Arabian Nights" Days, from princesses to female genies (witness how many fancy dress companies manufacture costumes of this type with names like "Arabian Nights Woman", or see the results that come up if you do an image search on "Arabian princess"). This is an example of Artistic License – History in the name of Fanservice: even leaving aside the fact that the costume is mostly codified by Western artists, it would logically only be worn by belly dancers and perhaps harem girls. Dressing an Arabian princess like this is rather like dressing a European princess as a go-go dancer.

Please note that, if the belly dancing outfit is being worn by a character who is actually a belly dancer, then it's an example of the Belly Dancer trope. This trope is primarily for works which portray the bedlah as everyday dress for Arabian women. For the other stereotypical clothing associated with Middle-Eastern women, see Hiding in a Hijab.