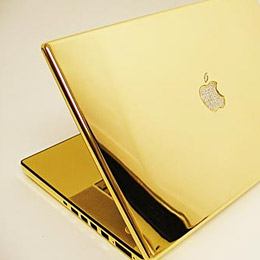 Because high-end laptops alone don't scream "I'm stinkin' rich!" loud enough
"I'd build a big tall house with rooms by the dozen,
Right in the middle of the town.
A fine tin roof with real wooden floors below.
There would be one long staircase just going up,
And one even longer coming down,
And one more leading nowhere, just for show"
— Fiddler on the Roof, "If I Were a Rich Man"
Advertisement:

If you can imagine it, rich people have purchased it.

In a nutshell, conspicuous consumption is any extravagant spending that has no real purpose other than just to show off someone's wealth. Sometimes this leads to a vicious cycle of "keeping up with the Joneses", when two people or families each feel that they need to buy more things to show they're just as wealthy as the other, sometimes going Up to Eleven (even if what is bought is Simple, yet Opulent).

Any way you look at it, these people are just spending money for the hell of it. You aren't buying a luxury car. You're buying a gold-plated one. You don't just have a private jet. You have a private aircraft carrier (and not for your private army either).

Yes, there can be at least somewhat understandable reasons to spend a lot of money. If you see an expenditure for a reason like these, it's not this trope:

This can apply just as often in Real Life as in fiction, but with fiction, some of the spending can even defy reality, thus overlapping with Fiction 500. Also common among the Nouveau Riche (often leading to A Fool and His New Money Are Soon Parted).

It also is often the case that a Mock Millionaire will use Conspicuous Consumption to portray themselves as super-rich; after all, they wouldn't be throwing that kind of money around unless they had a lot more in the bank, right?

A retailer that targets this demographic is Up Marketing.

Compare Money Fetish, Upper-Class Twit, Egopolis, Up to Eleven, Bling of War, City of Gold, and Suspicious Spending. This trope also goes very well with Awesome, but Impractical, as the stuff that costs the most frequently has the least practical use;note Case in point: the 24-carat gold-plated Macbook in the page image would scratch and dent incredibly easily, as gold is a notoriously soft metal and much less durable than aluminium, which most Macbooks are made of, or plastic, which most other laptops and computers are made from. the point isn't to use it (since anyone can afford something useful), but to show off that you can afford it.

Compare and contrast Simple, yet Opulent, where an item is obviously high-quality but not ostentatious or tacky.

Not to be confused with Crazy Consumption.

The stuffy rich people attending the Met Gala have rather unusual ways at blowing money, such as having a painting shaved into their drinks.

Alternative Title(s): Keeping Up With The Joneses

The stuffy rich people attending the Met Gala have rather unusual ways at blowing money, such as having a painting shaved into their drinks.