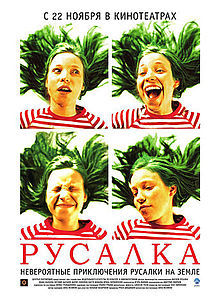 Русалка, released in English as Mermaid, is a 2007 Russian dramedy film directed and written by Anna Melikyan and starring Mariya Shalayeva. Alisa Titova (Shalayeva) is the bastard daughter of a long-haul sailor and a village girl. She lives with her mother and grandmother near the sea, dreaming of her father returning to them, and yearning to be a ballerina. After a traumatic fire leaves her mute, she learns to make her wishes come true by wanting them badly enough, but her every wish brings disaster in its wake. After her family moves to Moscow, she meets Aleksandr, a Russian entrepreneur selling plots on the moon, and falls in love with him. And now, despite her misgivings, she has a new wish to bring to fruition...

Not to be confused with the Russian animated short Mermaid.