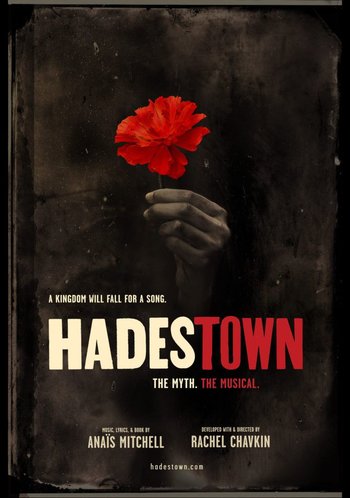 "The gods have forgotten the song of their love."
"On the railroad line on the road to Hell
There was a young girl looking for something to eat
And brother, thus begins the tale
Of Orpheus and Eurydice!"
—Hermes, "Road to Hell"
Advertisement:

Anaïs Mitchell's Hadestown began life as a small-scale 2006-2007 theatrical production in Vermont before it was turned into a concept album in 2010. In 2016, Hadestown returned to the stage with an expanded story and revised tracklist. This version of the show premiered Off-Broadway at the New York Theatre Workshop, followed by a reading at New 42nd Street Studios in 2017, a production at the Citadel Theatre in Alberta Canada in 2017, and a run at the UK's National Theatre from November 2018 to January 2019. It then transferred to Broadway's Walter Kerr Theatre, where it premiered on April 17, 2019.

The show is a Setting Update of the myth of Orpheus and Eurydice, with a deliberately vague setting that evokes the United States sometime during the mid-20th century. The messenger god Hermes is singing an old tale of Orpheus and Eurydice, a couple who struggle to survive in a harsh world where the seasons are out of joint thanks to Hades and Persephone's deteriorating marriage. While Persephone brings summertime and fills the world with life all too briefly, Orpheus hopes to write a song to bring back spring, and promises Eurydice the world.

When Orpheus is too focused on songwriting to provide, Eurydice is left to the harsh winter. Out of pragmatism, she accepts Hades' offer to come to Hadestown and work forever with food and board, learning too late it's in exchange for her life and memories. Armed only with his music and love for Eurydice, Orpheus sets off for Hadestown to get her back, and perhaps bring back spring as well. Hermes has warned the audience that it's a sad song, a tragedy, but holds out hope that maybe it'll turn out this time — only the Fates know for sure.

The Broadway show began with the following cast:

Advertisement:
Tracklist for the Broadway Production

On November 26, 2020 the Original Broadway Cast released a Christmas album titled If the Fates Allow: A Hadestown Holiday Album. The album mainly features the actresses who played the Three Fates, Jewelle Blackman, Yvette Gonzalez-Nacer, and Kay Trinidad, along with supporting features from the rest of the cast.

Tropes found in If the Fates Allow: A Hadestown Holiday Album: