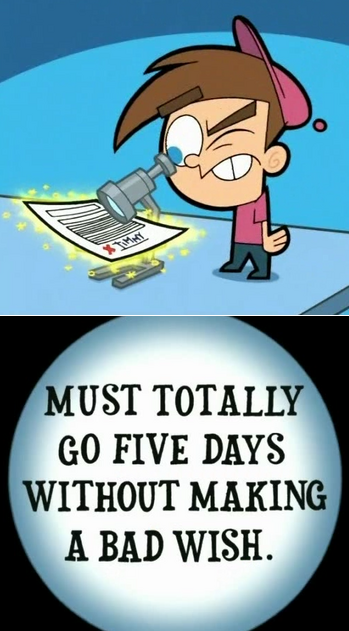 "The large print giveth and the small print taketh away."
— Tom Waits, "Step Right Up"
Advertisement:

Before signing or agreeing to something, you really should read through the contract. However, being a doorstopping Wall of Text, most people and characters just skip to the end and sign it, either trusting or rationalizing no-one would be slimy enough to sneak in something they wouldn't have agreed to in previous talks. Oh those poor, deluded souls.

Whatever contract, Deal with the Devil, electronic End User Licensing Agreement or Magically Binding Contract the character speedily signed will have one or more clauses in the fine print designed to screw them over, remove all liability from the other party, or nullifying the whole thing. The sneaky party will use this to coerce the signer into doing their bidding or taking their stuff, while simultaneously avoiding all consequences.

Most stories with this plot usually center on the signer trying to find a loophole to escape the contract, or otherwise live up to the much steeper conditions in order to finally complete it and render it fulfilled. On the positive side, if the series enforces Laser-Guided Karma, then you can expect the contract to get destroyed and/or overruled due to even more obscure legalese by a friendly Rules Lawyer.

In real life, things are more complicated and courts may side with the signor instead of the contract creator. In fiction, the law is pretty clear — if you signed it, then you agreed with it. Otherwise you wouldn't have signed, right? No one held a gun to your head (if they did, then it is void, if you can prove that). Long story short; read the damn contract. And if it's a particularly important contract, it's a darn good idea to retain a lawyer to go over it with you.

Read the Freaking Manual is a similar trope, for cases where the careless can be ensnared by equipment malfunctions rather than legal obligations. Compare Unreadable Disclaimer, Rattling Off Legal, and Tricked into Signing. Favored by the Morally Bankrupt Banker. Definitely a major component of the Comically Wordy Contract.

SpongeBob wants a free prize from Kelpo cereal, but there is none; turns out, the word "OFFER" is written in small print and he has to do a mail-in to get the toy.

Alternative Title(s): Did Not Read The Contract

SpongeBob wants a free prize from Kelpo cereal, but there is none; turns out, the word "OFFER" is written in small print and he has to do a mail-in to get the toy.