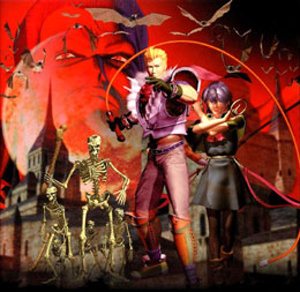 Castlevania (Japanese: Akumajō Dorakyura Mokushiroku, "Demon Castle Dracula Apocalypse"), commonly referred to as Castlevania 64, was the first 3D entry in the Castlevania franchise, one that was later given an Updated Re-release known as Castlevania: Legacy of Darkness, which both included a prequel sequence, somewhat expanded and remixed levels, and improved upon the controls.

Both the original and Legacy of Darkness chronicle the adventures of Reinhardt Schneider, a member of a Belmont branch family who inherited the Vampire Killer, and Carrie Fernandez, related to the Belnades clan, as they enter Dracula's castle to take the vampire out.

Most players think the games poorly handled their Video Game 3D Leaps, especially in light of the 2D critical darling, Castlevania: Symphony of the Night. Koji Igarashi, himself, effectively struck them from his official canon at the same time he disowned Castlevania Legends, but he seems to have warmed up to them significantly in later years — they were both included in the more recent publications of the CV timelines (though minus the descriptions), and Legacy of Darkness star Cornell has roles in both Judgment and Lords of Shadow.