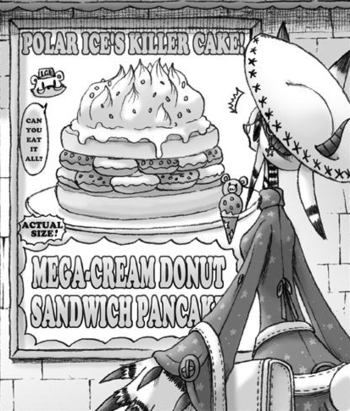 "Resting right in front of me were two jumbo-sized parfaits that I couldn't help but find a perversion of nature. You could have it for free if you ate the whole thing within half an hour, but this thing was clearly not built for human stomachs."
— Ren Fujii, Dies Irae
Advertisement:

Some times, a local restaurant (usually a steakhouse, at least in America) may decide to put the stomachs of gluttonous carnivores to the test. Usually has a time limit attached. Thus, they present a gigantic quantity of meat, possibly on a platter with other side dishes, that only those with iron stomachs can finish at all, much less finish in time. And should they succeed, fame and fortune awaits. Or at least their picture on a wall. The meal is usually as expensive as it is big, but anyone who wins the challenge doesn't have to pay for it. This is often extended to everyone at the challenger's table eating for free as well. Sometimes there is also an additional prize offered.

Differs from a standard Eating Contest in that where that trope is about two people eating to see which one can eat the most or finish the fastest, this one is about a single person taking on a gigantic platter of food, all alone with no help. Backing down or puking means game over.

Occasionally found in a Crossover with Masochist's Meal, when the item one must eat for the challenge is loaded up with Blazing Inferno Hellfire Sauce. But even then, there's usually a "quantity" requirement — eating just one chicken wing coated in the chef's famous ghost pepper sauce won't cut it, you've gotta eat a plateful (or at least a regular serving) of them.

The Old 96er is a 96 ounce beef steak. If anyone eats it, their whole table eats for free. Chet takes up the challenge.

The Old 96er is a 96 ounce beef steak. If anyone eats it, their whole table eats for free. Chet takes up the challenge.