Face of an Angel, Mind of a Demon 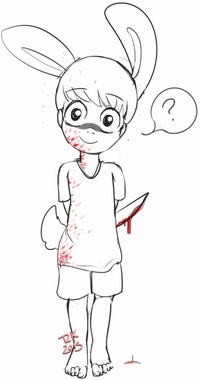 Splint, by LittleTLK.
Image used with permission of the artist, LittleTLK and the character creator, Ka1dus.
"He'd stand there amid the carnage, blood on his hands and stolen jewelry in his pocket, and with an expression of injured innocence declare, 'Me? What did I do?'
And it was believable right up until you looked hard into those cheeky, smiling eyes, and saw, deep down, the demons looking back."
— Description of Carcer Dunn, Night Watch
Advertisement:

Much of the time, in keeping with Black-and-White Morality and Beauty Equals Goodness, we expect to be able to tell good and bad characters apart just by looking at them. We assume someone's good if their face looks innocent, compassionate, virtuous, or honest, while we assume the worst of someone who looks mean, untrustworthy, immoral, or threatening. Therefore, it makes for an unsettling contrast or even a shocking revelation when a character looks benevolent on the outside but turns out to have a malicious personality. On the one hand, because they look just like you'd expect a good character to look, they could try to inflict more harm by deceiving others about their real intentions. On the other hand, they could be completely upfront about being evil and allow their enemies be spooked by the discrepancy between their appearance and their actions.

This is different from Beauty Is Bad or Evil Is Sexy because looking attractive and looking innocent or virtuous are not necessarily the same thing. A Killer Rabbit is someone or something who looks weaker than they are, but not necessarily more innocent. A Bitch in Sheep's Clothing is someone who pretends to be nice but is actually a Jerkass; being nice or mean isn't the same as being good or evil, which is why we have tropes like Affably Evil and Good Is Not Nice. Very close to this is Wolf in Sheep's Clothing when someone disguises themself to look less threatening, but who might be anti-heroic or misunderstood rather than pure evil or evil at all. Another related trope is The Fake Cutie, who likes to act cute, but whose real personality is anything but. They Look Just Like Everyone Else! is a similar idea but refers to villainous characters who look ordinary and unremarkable.

This is the parent trope to Enfant Terrible when applied to children since a common assumption is that Children Are Innocent. Contrast and compare Beauty Equals Goodness, when an otherwise heroic or non-evil character looks beautiful, angelic, and lovable while the story's villains are ugly. Compare Divinely Appearing Demons, when the inhabitants of hell superficially resemble creatures of heaven, and contrast with Obviously Evil, which is when a bad character looks as evil on the outside as they are on the inside. The inverse is Face of a Thug, when a character looks evil on the outside but is either good or neutral on the inside. Frequently combined with Light Is Not Good, since light is usually equated with holiness, as well as Pure Is Not Good since purity is usually equated with innocence.

Gibbs discusses this trope and mentions how the Loaf has a happy smile and adorable eyes, and yet doesn't hesitate to maul.

Gibbs discusses this trope and mentions how the Loaf has a happy smile and adorable eyes, and yet doesn't hesitate to maul.