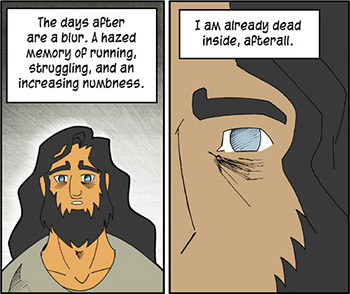 "Ever look into his eyes? There's nothing there."
— Angel, "Are You Now Or Have You Ever Been"
Advertisement:

Lack of pupils, and customary light reflection; iris shading goes from the usual radial to gradient; eyelids drop. Yep, this character is suffering from the "Empty Eyes" trope, a condition denoting that the character is dying, dead, distracted, shocked, traumatized, mind-controlled, broken, in a state of Tranquil Fury, completely insane, or some combination of the above.

Due to the condition of shock causing the eyes to dilate, realistic live action will never have this unless the producers don't know better. Could be way to show someone is so shocked they haven't blinked for a while, because the tears that accumulate would make the eyes more reflective and the pupils harder to see. Pushed for effect in Break the Cutie scenarios.

Sister trope of Prophet Eyes, and the two may coincide as repeated trauma could give someone a Disability Superpower.