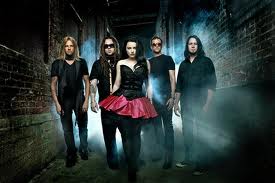 What you, what you, want!!
How can you see into my eyes like open doors?
Leading you down into my core where I've become so numb.
Without a soul my spirit's sleeping somewhere cold,
Until you find it there and lead it back home.
"Bring Me to Life"
Advertisement:

Evanescence is an American Alternative Rock / Nu Metal / whatever band founded in Little Rock, Arkansas in 1995 by (then teenaged) singer / pianist Amy Lee and guitarist Ben Moody. Since their first big hit "Bring Me to Lifenote Wake me up inside in 2003, the band have won two Grammy Awards so far and experienced various changes in line-up.

Evanescence's melancholic and morbid sound places them firmly in the Goth category. Coupled with accessible and fairly emotional songwriting, this has gained the band Wolverine Publicity among the "goffik" populace of fanfic writers. This emo appeal is perhaps one of the arbitrary reasons why they are associated with Linkin Park by many. For those more familiar with Gothic Metal, Evanescence is also heard being compared with Lacuna Coil and Within Temptation.

The band went on "indefinite hiatus" in 2012, following the release in 2011 of their Self-Titled Album and their being sold to Concord Music Group (CMG) and Lee's statement that the band needed to take a break to "figure things out."

In 2014 it was announced that Lee would be suing Wind Up Records for "$1.5 million in unpaid royalties," and that Evanescence had left CMG and were now independent artists. She also revealed that she would be releasing her first solo album (titled Aftermath), which was released on August 25, 2014. The album is also the soundtrack to the film War Story., and is a collaboration with cellist/composer Dave Eggar. In 2016 Lee released a solo children's album, Dream Too Much.

The band performed with an orchestra (a group of local classical musicians in each respective city on the tour) in late 2017 tour to promote the album Synthesis, then reprised the orchestra tour in the summer of 2018 in a co-headlining tour with Lindsey Stirling.

In March 2021, their long-awaited fourth album, The Bitter Truth, was released, their first since 2011 to feature all-new content.

Band Members, Past and Present:

The music of Evanescence provides examples of:

Tropes found in their music videos:

Must be exhausting to lose your own game.