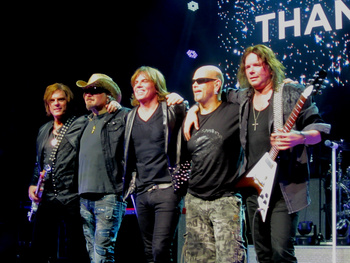 Europe in Stockholm 2016: John Levén, Mic Michaeli, Joey Tempest, Ian Haugland and John Norum.
We're leaving together,
But still it's farewell,
And maybe we'll come back to earth, who can tell?
I guess there is no one to blame,
We're leaving ground,
Will things ever be the same again?
—"The Final Countdown"
Advertisement:

Europe is a Swedish melodic hard rock band mostly known for the mega-hit "The Final Countdown". The band's roots can be traced back to 1979, when they started out as Force. In 1982 they started performing under the name Europe.

After becoming quite successful in their home country, with two successful albums under their belts, Europe achieved their greatest success internationally with their third album, The Final Countdown, with its famous title song becoming a number one hit worldwide thanks to the growing popularity of Hair Metal. While Europe begins and ends with this song as far as a lot of people are concerned, they had other hits, such as the Power Ballad "Carrie" (which was actually a bigger hit than "The Final Countdown" in America when it was released in 1986).

Europe and their music feature the following tropes: