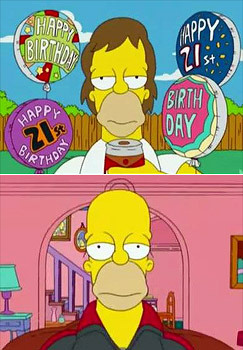 His hair went the way of the doh-doh.
Advertisement:

In many shows, when a bald character is shown in a Flashback, they're shown as having more hair in the past than they do in the present. Quite a lot more, in fact. This guy had such flowing locks that you would have to think he was punished by the hair gods for whatever reason.

In a broader use of the trope, the modern character may be known for a conservative business-like hairstyle only to reveal them as a shaggy punk-rocker style as a teenager. It can be an effective visual shorthand to show a scene is set in the past, but also imply Character Development in how a person has changed. Maybe he's undergone an Important Haircut to be bald by choice, or he's fallen from the heights of his youth to become a total loser. Maybe it adds to them being uncomfortable with a particularly embarrassing or dated hairstyle, showing his tendency to fall victim to fad fashions and being more mature now.

In the strictest practical sense, it's also a lot easier and more convincing for a bald actor to wear a long-haired wig than to make a realistic-looking shorter haircut. It also makes it clearer that this is a younger version of the character played by the same actor, avoiding the hassle and expense of finding a Time-Shifted Actor. But the strength of the trope allows it to be used even in animation.

This trope can look forward, too — a character with hair in the present might be shown to be bald in the future, either because he's really old or to hammer home the idea that he's a Future Loser.

Evidently this can be Truth in Television. Just because someone had thick hair when they were young does NOT mean they won't lose it all as they age. Since baldness is genetic, there is a wide amount of variation in how it happens to different people. note As a rule of thumb: a man should go bald in the same way and starting at the same age that his mother's father did (because oddly enough this is a trait on the X chromosome, so it's your mom's genes that decide it). It is also important to note that haircuts cost money. Men might take to shaving their hair because they simply don't have enough of it to justify the cost of the haircut. So just because a man is bald doesn't mean his scalp no longer grows hair at all. Also, depending on his cowlick pattern he may end up with patches of hair surrounded by bald areas. Since this can look rather silly, a lot of men will opt to just shave it all.

Opposite of Rapid Hair Growth. Can overlap with, but is not to be confused with Funny Flashback Haircut, where a haircut in a flashback can take all sorts of shapes or not change at all as a joke. Compare Never Trust a Hair Tonic, for when bald characters try (and fail) to recapture their once-glorious hair. Contrast Prematurely Bald, which is a common subversion of this trope — you'd expect the character to have had hair when he was younger, but he didn't.