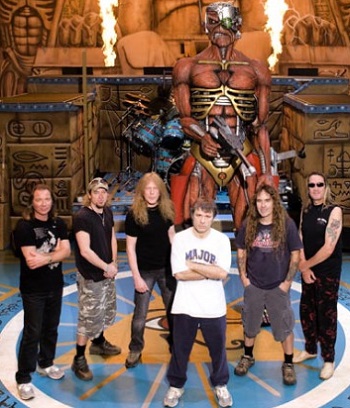 From left-to-right: Dave, Adrian, Janick, Bruce, Steve, Nicko, and of course, Eddie in the background.
Influences:
Advertisement:
"People talk about Power Metal, Classic Metal, Death Metal, Black Metal... But when someone asks us what kind of music we do, I say: We're the Iron fucking Maiden!!!!!"
— Bruce Dickinson

The band takes its name from a fabled medieval torture device, allegedly used to dish out Cruel and Unusual Deaths to witches and the like, as an alternative to burning at the stake. If you're really interested in how it worked, all we're going to say is that it involves a human-sized canister with a hinged lid, and Spikes of Doom on the inside of the lid. You know where this is going. (Tropers familiar with Roald Dahl's Matilda may recall a less lethal version in the form of the Chokey, a Punishment Box lined with glass shards and metal nails that weren't quite long enough to cut you as long as you stood perfectly still.)

It was founded in 1975 by bassist Steve Harris. The band went through a lot of line-up changes before the release of their first album, simply called Iron Maiden, in 1980, recorded by Harris, singer Paul Di'Anno, guitarists Dennis Stratton and Dave Murray, and drummer Clive Burr. In the follow-up, Killers from 1981, Stratton, due to Creative Differences, was replaced by Adrian Smith, from the band Urchin. This was also the last album with Di'Anno, who was fired for drinking problems but wanted to leave the band anyway and shows no animosity for it.

The real success came a year later, in 1982, with The Number of the Beast, which marked the debut in the band of Bruce Dickinson, Di'Anno's replacement. The band's classic line-up came full circle in 1983 with the arrival of drummer Nicko McBrain, replacing Clive Burr, for personal problems. With this line-up, the band recorded four studio albums (Piece of Mind, Powerslave, Somewhere in Time, and Seventh Son of a Seventh Son) and a live album, (Live After Death) which marked the climax and end of the so-called "Golden Years".

Unfortunately, from this point onwards, the things weren't going so well for the band. Adrian Smith left the band due to Creative Differences (although it was in good terms, it was just that he wanted to play in a softer mood than that one of Maiden) and he was replaced by Janick Gers, who played in the band White Spirit, and with Fish (former singer of Marillion) and Ian Gillan before Bruce Dickinson brought him as guitarist of his solo career. The follow-up to Seventh.., No Prayer for the Dying, was considered inferior to the former albums, despite having the band's first #1 hit. ("Bring Your Daughter... To the Slaughter") The follow-up, Fear of the Dark, charted in #1, but after it, Bruce Dickinson left the band.

He was replaced by Blaze Bayley, who wasn't well received. Not only that, but the band also changed their Record Producer, and thus, everything was set for the band's Dork Age. The two albums released in the Bayley-era (1995's The X Factor and 1998's Virtual XI) weren't so well received, and it seemed that the band was going to broke...

...But 1999 brought the biggest news: Bruce Dickinson and Adrian Smith returned to the band, but only Blaze left, thus making Maiden a sextet with three guitarists. Not only that, but the follow-up to Virtual, Brave New World, was a big hit, with a lot of people claiming the album as another classic album of the band. This line-up (Dickinson / Smith / Gers / Murray / Harris / McBrain) continues to our days, having recorded other three albums: 2003's Dance of Death, 2006's A Matter of Life and Death and 2010's The Final Frontier, the band's most recent #1 album. After Dickinson's successful recovery from throat cancer, The Book of Souls was released in September 2015. A music video has been released

The band started working on a new album in 2019 while touring for The Book of Souls and were planning to release it in that year or early 2020, but COVID-19 delayed the album. In mid-July 2021 they made the announcement that the new album, titled Senjutsu, will be released on September 3rd 2021. The first single, The writing on the wall

Their sound is characterized by twin guitar (later triple guitar) harmonization and galloping bass, as well as the operatic vocals of Bruce Dickinson. Their most notable songs fall into three themes: Ominous ("The Number of the Beast", "Fear of the Dark"), historical (war songs such as "The Trooper" and "Aces High", historical events such as "Run to the Hills" and the biographical "Alexander the Great") or derivative ("The Wicker Man", "Flight of Icarus", "Brave New World"). Also notable is the band's promotional imagery, featuring zombie mascot Eddie the Head.