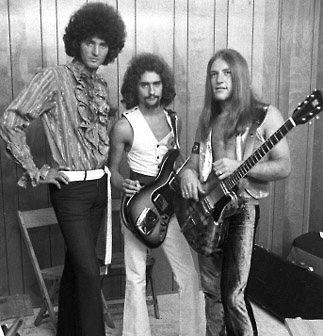 One of the most popular American rock bands of The '70s, Grand Funk Railroad was formed in 1969 by Mark Farner (co-lead vocals, lead guitar, keyboards), Don Brewer (co-lead vocals, drums) and Mel Schacher (bass guitar), with Craig Frost (organ) joining the band by the time they had their biggest hits. Hailing from Michigan, they took their name from the Grand Trunk railroad that operated in the state.

Earning massive popularity at the expense of critical derision with their hard-edged Blues Rock style, the group shifted millions of records, scored two number one singles on the Billboard Hot 100 ("We're An American Band" and "The Loco-Motion") and even broke the attendance record at Shea Stadium set by The Beatles. However, disputes within the band, Executive Meddling and burn-out resulting from their touring schedule took their toll on Grand Funk, who decided to call it a day in 1976.

Reunion attempts were initially unsuccessful, resulting in Mark Farner quitting the band in favour of his solo career as a Christian Rock artist. He was replaced by former .38 Special vocalist Max Carl and KISS guitarist Bruce Kulick, with whom the group continues to tour.