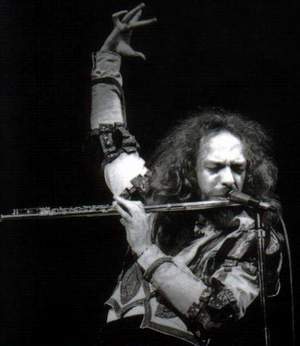 Ian Anderson delivers a blistering flute solo.
Aqualung my friend, don't you start away uneasy
You poor old sod, you see, it's only me
—"Aqualung", Aqualung

Really don't mind if you read this one out.

Progressive rock group formed in 1968 and mostly known for their '70s output, particularly their albums Aqualung and Thick As A Brick. Made up of lead singer/flutist Ian Anderson, guitarist Martin Barre (who joined in 1969), and one of rock's most frequently revolving line-ups.

The band is named after an 18th-century agriculturist

, though Ian Anderson hates the name. During their early days, their manager would change the name of the band so that they could be booked at places they had flopped at, and "Jethro Tull" was suggested by one of the manager's staff members who was a history geek; as Anderson put it, "Jethro Tull is the name we were using when we quit sucking."

Ian Anderson laid Jethro Tull to rest in 2014, but the spirit of Tull goes on with him and his solo band, who continue to tour and record...

Until January 2018, that is. Ian Anderson posted an update on the band's website showing him in the studio working on his next solo album, which is currently slated for a 2020 release.

The band's studio album discography is as follows: