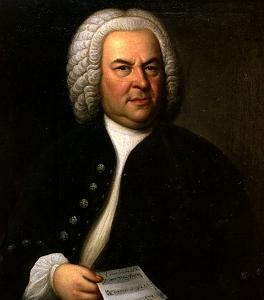 German composer and virtuoso organist (21 March 1685 – 28 July 1750) whose works represent the culmination of the Baroque Music era and whose death is generally considered to mark the point of transition into the Classical era. Bach, Mozart, and Beethoven are seen as the three main contenders for "Most Sublime Music in Western History," and not without reason.

Bach was the most prominent member of an extended family of musicians. It was often said of he, his wife, and his children that he could form an orchestra with them all. Between his first and second wives, Bach fathered twenty children note Seven with his first wife Maria Barbara; after her death he remarried and had another thirteen with Anna Magdalena. Sadly, only nine of them survived to adulthood. Four of his sons— Carl Philipp Emanuel, Johann Christian, Wilhelm Friedemann, and Johann Christoph Friedrich— grew up to be notable composers in their own right. In Bach's full family tree

there were over fifty professional musicians, making it at least a family business if not an outright dynasty. (Then there's P.D.Q. Bach, who... doesn't really count.)

Though today he is considered one of the most influential composers in history, in his lifetime he was better known as an organist than a composer; particularly towards the end of his career, his work was deemed outdated by his contemporaries. He did maintain Cult Classic status among professional composers who studied his work for technique, including such admirers as Wolfgang Amadeus Mozart and Ludwig van Beethoven. But among the musical public he was generally not seen as one of the great composers until his works were re-popularized by composer Felix Mendelssohn in the early 1800s, and has since been Vindicated by History as one of the greatest musical artists of human history. No better evidence of that can be of the Voyager Golden Records on both deep space probes, Voyagers 1 and 2, which has three pieces by him, intended to be an introduction to any intelligent alien civilization who can figure out how to play it.

Noted in particular for his masterful use of contrapuntal technique, Bach's oeuvre consists of well over a thousand works. Some of the more well-known ones are:

In addition, Bach's church gig at Leipzig's Thomaskirche required him to perform a sacred cantata on every Sunday and feast day of the Lutheran calendar. He composed at least three complete yearly cycles of cantatas — over 300 works (1/3 of which, alas, are lost). The variety of form and style, mastery of polyphonic vocal writing, and breadth of instrumental tone color found in these works were unrivaled by his contemporaries.

Despite Bach's virtuosity and deep spirituality, he was also refreshingly human. He was once rebuked for stretching a brief leave of absence into several months without apology or explanation. He often battled his employers over the duties and responsibilities of his position. As said above, he also wrote a cantata about a man's concern over his daughter's consumption of coffee (he was for it, by the way). Then there is the wonderful story of Bach drawing his sword in an altercation with an instrumentalist that he had insulted, calling him a "nanny-goat bassoonist."

Interestingly, Bach shares not only a year of birth with George Frederic Handel (who was born a mere 37 days before Bach in a town just under 200km away by road—130 as the crow flies), but also a possible cause of death: they were both unsuccessfully operated on by the same eye surgeon — an "oculist" called the Chevalier John Taylor, often referred to as "the poster child for 18th century medical quackery." (Taylor may also have reduced the quality of life of the English historian Edward Gibbon, author of the famous The History of the Decline and Fall of the Roman Empire.) Both Bach and Handel are honoured (with 17th-century English composer Henry Purcell) on July 28 (the day of Bach's death) in the calendar of saints used by most Anglican and Lutheran churches, as composers of sublime Protestant sacred music.