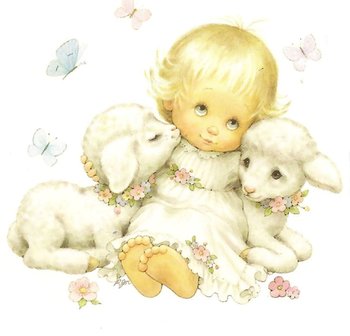 "He will carry the lambs in his arms, holding them close to his heart." Isaiah 40:11
Sheep may safely graze and pasture
In a watchful Shepherd's sight.
Those who rule with wisdom guiding
Bring to hearts a peace abiding
Bless a land with joy made bright.
— Johann Sebastian Bach, "Sheep may safely graze"
Advertisement:

When sheep (especially lambs) appear in fiction, they tend to be very sweet and kind, with wool that makes them look cuddly and big round eyes. However, note that this does not always apply in real life: while real life sheep can be adorable when young, they tend to grow out of it when they get older and have some characteristics that people tend to find freaky, gross or otherwise not cute, such as their eyes (which have rectangular pupils) and dirty wool. And wild sheep, such as mouflon or their American counterparts the bighorn sheep, are...well, wild. They're not docile or compliant like domestic sheep are; those traits are the result of thousands of years' worth of selective breeding. And domestic rams are rarely docile: they're large, powerful animals that can be highly territorial and aggressive and are very capable of inflicting serious damage if they attack someone, even if they lack horns. Also, despite the reputation of both domestic and wild sheep as being unintelligent, they actually do have a measure of intelligence: they can remember faces, and figure out how to get past seemingly insurmountable barriers (whether that's the side of a mountain, or a fence.)

An explanation for how sheep and lambs become the animal strongly symbolizing innocence goes back to biblical times. Sheep were very important animals in numerous stories in The Bible and frequently used in a majority of hymns. While lambs were already prominent in The Old Testament, after Jesus' birth a flock of sheep attended and honored the birth of "Their New Born King" in a manger in Bethlehem. Since then, Sheep and lambs immediately became associated with Jesus (referred as "The Lamb of God") and his followers. However, sheep and lambs were used in sacrifices in order for people to be forgiven for their sins which was frequently mentioned in both The Old Testament and The New Testament. After Jesus' crucifixion, sheep immediately became the default animal representing innocence, gentleness, peace and purity, more so than doves, along with symbolizing sweetness, forgiveness and meekness. Due to this, lambs are very prominent on holidays (such as Christmas and Easter) that have religious origins.

A non-religious example is lambs being heavily associated with the seasons of spring and winter. During the season of spring (winter to a lesser extent), ewes give birth to many newborn lambs (referred as "spring lambs") during a period known as "Lambing Season" by the public. As a result, lambs alongside rabbits became the default animal symbolizing the season of spring and were popular on seasonal greeting cards and letters throughout the 20th century.

See also Counting Sheep. See Savage Wolves for the Sweet Sheep's worst enemy, alongside Cunning Like a Fox and Foul Fox, another natural enemy for sheep. Contrast Gruesome Goat for a less pleasant portrayal of caprines.

This is a subtrope to Good Animals, Evil Animals and Herbivores Are Friendly and is also a type of Animal Stereotype. Compare Cute Kitten, Bunnies for Cuteness, Precious Puppy, and Sweet Seal.