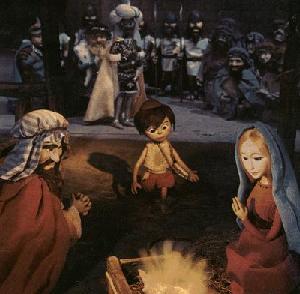 "Blessed are the pure in heart; for they shall see God"
"Drummer boy, you may not believe me, but this... is the luckiest day... of your... life!'
— Ben Haramed (José Ferrer), The Little Drummer Boy
Advertisement:

The script is by Rankin-Bass's favorite writer, Romeo Muller; the music follows the favored R-B formula, starting with a classic Christmas tune and adding original songs by Maury Laws and co-producer Jules Bass. A touch of distinction is added by the choral work being performed by the Vienna Boys Choir.

A television sequel entitled The Little Drummer Boy: Book II was produced in 1976, also narrated by Greer Garson, but this time featuring Zero Mostel as the voice of Brutus.

This story has inspired several imitations and variations; for example one Puerto Rican TV Christmas Special was about a little boy who wanted to visit the Nativity to ask Baby Jesus to cure his dying father (in the apparent belief that the event repeats itself every year). A Christmas Miracle happens, of course. Similarly, the Spanish Christmas song Burrito Sabanero is about a boy riding a burro to reach the Nativity.

VeggieTales did a remake of this special in 2011.