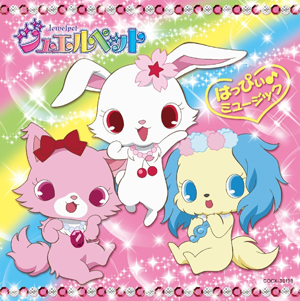 You wouldn't get these in any pet shop.note From left to right: Garnet, Ruby and Sapphie. Not shown: the remaining 39 pets.
Advertisement:

If Webkinz had magic and jewels, and was set in a world like Harry Potter, Jewelpet would be the result.

A character franchise created by Sanrio and Sega collaboratively in 2008, Jewelpet is about anthropomorphic small animals named after jewels, birthstones and other minerals, who can use magic with the power of their eyes, made of said minerals. It has the distinction of being the first collaboration between Sanrio and another toy company, creating a successful Cash Cow Franchise in Japan that lasted until around 2015.

The Jewelpet toy line has internet connectivity capabilities, which may remind you of something else in particular. Sega Toys collaborated with Sanrio to release a line of plush toys of the characters in January 15, 2008. Each plush contains a password to access the Web-Gurumi website, where the customer "adopts" the respective pet in the virtual world. Accounts expire within one year, unless another plush is bought, and added to the user account.

Of course, toys isn't all there is to such a successful franchise; there are TONS of things related to Jewelpet: stationery, school supplies, bags, raincoats, umbrellas, bento boxes, you name it. It is today one of Sanrio's most popular franchises to date.

As the series completed its first anniversary, its first anime debuted on Japanese TV. Each anime season has its own storyline, distinct from the toys and from each other. There is also a movie, a light novel, 3 manga series and 6 Video Games with their own page.

open/close all folders
Anime Seasons
Jewelpet (2009): The first series produced by Studio Comet after Onegai My Melody ended. Set in the fictional city of Takaragaseki, the main heroine, Rinko Kougyoku, meets Ruby when the latter is tasked by the Gods to find the Jewelpets who fell in the human world. Rinko and her friends decide to help her, while stopping the evil Jewelpet Diana from doing the same. This season, along with Magical Change, spends more time on the human world than other seasons.Jewelpet Twinkle (2010): The second season follows Akari Sakura, a cripplingly shy and insecure girl who meets Ruby, who's looking for a human who'll attend the Magic Academy with her. Akari attends the Magic Academy and goes through middle school life back in the human world, while getting involved in the drama of the Jinnai family, whose son she likes, and achieves personal growth in the process. In 2013, it received an OVA sequel.Jewelpet Sunshine (2011): The third season is wildly different from anything that came before it. Shifting gears from your typical Magical Girls and their cute mascots plot to a school comedy that sometimes has magic on the side, it follows the misadventures of the Plum class, a "class of lost causes" on their last year of high school. Kanon Mizushiro and Ruby are members of that class and roommates, who have to juggle their uneasy friendship with their crush on Mikage Shiraishi. It took several departures from many elements of the franchise, such as featuring a confident, mean-spirited heroine, putting less emphasis in grouping characters as trios, as well as the aforementioned abandonment of magic as a main plot point (which carried on to following seasons). If the anime is now a completely different beast from the toy line, it's thanks to this season.Jewelpet Kira Deco! (2012): The fourth season focuses on a parody of a Sentai team called Kira Deco 5, composed of five humans (the main protagonist of which is Pink Oomiya) and their Jewelpet partners. They are tasked with finding the legendary Deco Stones that will revive Jewelina, who was turned into stone many years before, and save the human world from the Eternal Darkness.Jewelpet Happiness (2013): The fifth season focuses on Chiari Tsukikage, who attends the Jewel Academy. Commissioned by Jewelina, Ruby and the other mascots march into the campus carrying the Jewel Box, which they have to fill with Magic Gems, obtainable by running the Jewelpet Cafe Happiness and making friends in the process. Chiari and her friends agree to help them with their goal. In many ways, it's a throwback to Sunshine, albeit with a more continuous plot.Lady Jewelpet (2014): The sixth season is the first to be produced outside of Studio Comet; most of the animation is by ZEXCS (They made the The Flowers of Evil anime. Yeah.)note Comet still serves as producer. The protagonist Momona is brought by her cousin's wife to the Jewel Palace in order to become a Petit Lady, a contestant for the title of Lady Jewel, the queen of Jewel Land. After three years of comedic seasons, Lady adopts a serious tone which harkens back to the days of Twinkle, although it doesn't return to the Magical Girl genre.Jewelpet: Magical Change (2015): Animated by Studio DEEN, the seventh season has the Jewelpets being sent to Earth to investigate how to get their castle back to their world. They meet a girl with a magic pendant and receive the power to turn into humans. Has only 39 episodes due to the anime series getting canned.
Advertisement:
Side Stories
Jewelpet the Movie: Sweets Dance Princess (2012): In this movie co-produced with Studio Bridge, Ruby, Garnet, Sapphie, Labra, Angela, Sango, Jasper and Charlotte are tasked with going to the Sweetsland Kingdom in a diplomatic mission to celebrate Princess Mana's 7th anniversary. A new Sweetspet, Park, suddenly appears at the party and becomes friends with them. However, the heroes have to contend with Duke Creme de Brûlée's plans to overthrow the kingdom. And what exactly is Park's true nature?Jewelpet: The Fuss in the Jewel Festival!? (2012): A light novel serialized in Kadokawa's Tsubasa Bunko. It focuses on the non-canon Jewelpet Lollip, unique to this story. It tells the story of Lollip's experiences and bonds with Ruby and her friends while setting up the Jewel Festival in Jewel Land.Jewelpet Attack Chance!? (2016): A Flash-animated ONA created by Mako Morie, a regular manga author for the franchise and animated by AIC Project. Features Ruby, Labra, Sapphie and a girl named Ruri, a superfan of Jewelpet, who try to find a way to convince people to make a new season. Notably supervised by Hiroshi Negishi note  Notable for directing all of the Tenchi Muyo! stuff that's not part of the canon universe . Stopped after erratically releasing 3 episodes.Jewelpet Attack Travel (2022): Produced as part of the franchise's 10th anniversary; was supposed to be released on February 7th, 2020 but instead premiered on Niconico in May 2022 due to production issues. Ruby, Garnet, and the other familiar, jewel-eyed Jewelpet characters suddenly going on a school trip with the teacher Iruka to China's Sichuan Province. However, there is something odd about the tour conductor, driver, note  both of whom are actually Lamune and Da Cider from Lamune & 40 which was also produced by Ashi Pro and directed by Negishi and guide on their sightseeing bus as it heads towards its true destination. Hiroshi Negishi returns to direct this movie and the animation is handled by Ashi Productions. The short would have accompanied the film Kukuriraige -Sanxingdui Fantasy-, which remains shelved due to the COVID-19 Pandemic.