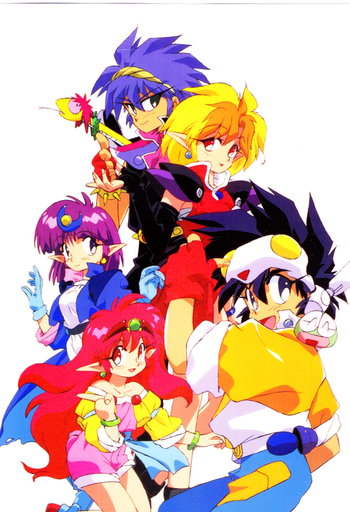 Our hero, Baba Lamune encounters a mysterious girl selling video games on his way home from school. When he gets back home, he starts playing the game he bought, named "King Sccashernote or Squasher". After playing for hours, he beats the game — and then the girl who sold him the game comes out from the television. She introduces herself as Milk and asks him to save her world — Hara-Hara World — from a Evil Overlord. And then she promptly drags him into the TV before he could ask any question or say no... Humongous Mecha and Hilarity ensue.

NG Knight Lamune & 40 is a traditionally straightforward Kid Hero Shōnen series, which is quite a popular theme for the age group.

In June 2019, Discotek Media licensed both NG Knight and VS Knight TV series for home video release and both are

. Discotek has also renewed the license for Lamune & 40 Fresh, which they re-released under its original name, as well as eventually acquiring the EX and DX OVA's.

Note: Not related in any way to the 2005 Lamune anime.

The Lamune & 40 franchise provides examples of: