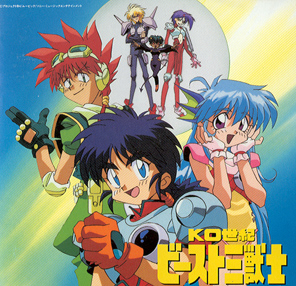 The series started as a three episode Original Video Animation, which was followed by a four episode sequel.

Thousands of years in the future, the earth is split in two. While the southern hemisphere, ruled by Czar Master, is in another dimension, the northern hemisphere is populated by tribes of humanoids who can morph into anthropomorphized beasts.

Escaping from their human captors, Wan Derbard of the Tiger tribe, Bud Mint of the Bird tribe and Mei Mer of the Mermaid tribe, along with Tuttle Millen from Mei Mer's tribe and a little girl named Yuuni Password, whose scientist grandfather wanted her safely away, seek a mysterious treasure called Gaia. Our companions have with them the Jinns, three statues-cum-machines that combine to form a Humongous Mecha.

The English version is something of a Gag Dub: the voice cast added some Pokémon references. The series was released in America by Nozomi Entertainment.