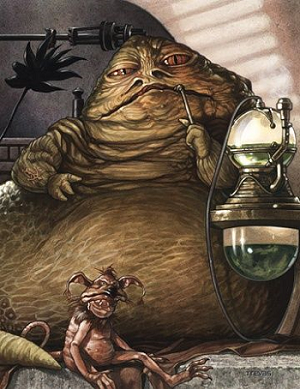 That giggling pipsqueak at the bottom,
not the Villainous Glutton who owns him.
"He's not a devil. He's more like... a pimple. He can't do anything on his own."
— Danette, on Gig, Soul Nomad & the World Eaters
Advertisement:

The Imp is tons of vices rolled into one, with the baggage that something about him totally destroys him as a threat: sheer laziness, apathy or just being very tiny. The Imp looks like he's trying too hard, intentionally or because of the designers. So whether or not they have delusions of grandeur, Imps just end up behaving very practically, wanting mostly to have fun and to wallow in their vices.

While commonly in a sidekick role to a stronger character, you often see imps with heroic characters as much as with villainous ones. Aside from heroes being less likely to beat on them, imps can function as the hero's "Bad Angel". But in this case, it mainly ends up showing off how decent and good-hearted the hero is, because he doesn't take the Imp's advice seriously.

Imps are the Weasel Mascot, Chaotic Neutral version. They can occasionally cause a great deal of havoc on their own, making them a Not-So-Harmless Villain, but usually whatever holds them back stops them from doing too much damage in the end. Frequently overlaps with the Snarky Nonhuman Sidekick. They are sometimes prone to Dark Is Not Evil. For portrayals of creatures actually called imps in-universe, see Our Imps Are Different.