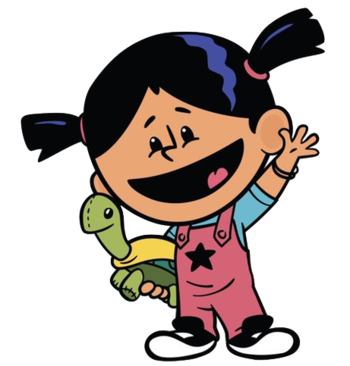 You've seen 'em before. That great big smile… that innocent look in their eyes that just screams "hug me!"...
Advertisement:

The Cheerful Child is a joyous and optimistic child, forever with a sunny disposition on life. They might, if they're the irrepressibly curious type, know a bit more about the world than respectable people think kids of that age ought to know.

Very common in Slice of Life shows, or cartoons centered around and/or made for young children, where little conflict happens. May serve as a foil to an older sibling in the latter's Coming of Age Story. Under optimal conditions, or with some luck, the Cheerful Child usually grows up to be a Pollyanna, a Genki Girl, or a Love Freak. Or, if male, into a Keet. Very unfortunate Cheerful Children can be a variant of The Woobie, or worse.

The Constantly Curious are usually Cheerful Children, as is anyone Curious as a Monkey. Their overly happy demeanor may make them come off as an Annoying Younger Sibling to their older sibling(s).

Compare the Kawaiiko and The Cutie, which is about this appeal regardless of age, and the Adorably-Precocious Child, who may or may not be cheerful but is usually cute.