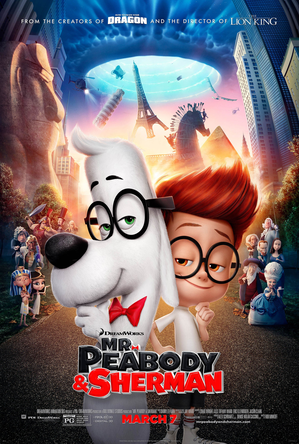 Leaving their mark on history.
Judge: Mr. Peabody, you're a Nobel Prize-winning scientist, a world-renowned explorer, and you're an Olympic gold medalist in the long jump and the decathlon. You're sure you're capable of meeting ALL the challenges of raising a human boy?
Mr. Peabody: With all due respect, how hard could it possibly be?
Judge: [dubious look]
Advertisement:

Mr. Peabody & Sherman is a 2014 computer animated adventure-comedy film based on the Peabody's Improbable History segments from Rocky and Bullwinkle. It is the fourth feature film adaptation of the 1960s animated television series and the first to be fully animated (1992's Boris and Natasha and 1999's Dudley Do-Right were live action, while 2000's The Adventures of Rocky & Bullwinkle used the Roger Rabbit Effect), as well as the fifth film based on a Jay Ward property.

Mr. Peabody is a business titan, inventor, scientist, gourmand, two-time Olympic medalist and genius who also happens to be a dog. Using his most ingenious invention, the WABAC machine, Mr. Peabody and his adopted boy Sherman hurtle back in time to experience world-changing events first-hand and interact with some of the greatest historical characters of all time. But when Sherman breaks the rules of time travel, our two heroes find themselves in a race to repair history and save the future, while Mr. Peabody may face his biggest challenge yet - being a parent.

The short film Almost Home played in front of the theatrical release, as a prequel to DWA's 2015 release, Home.

The Netflix series The Mr. Peabody & Sherman Show is a Sequel Series to this film; an article

announcing the show in Variety states that the characters "launch the TV variety show because at the end of the movie they’re outed as time travelers, so they decide to capitalize on that."