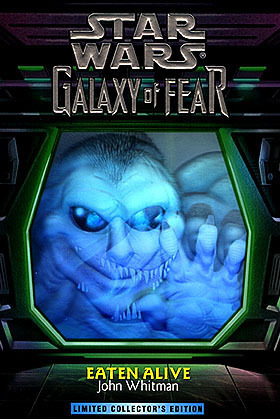 The whole galaxy seemed to stretch out before them. It was dark, and dangerous, and full of fear. But it was also full of stars, and the stars burned brightly.
— The Hunger
Advertisement:

written by John Whitman, is a series of children's sci-fi horror novels set in the Star Wars Legends continuity. The series is centered on the Force-sensitive Tash Arranda and her brother Zak, who travel with their Uncle Hoole, a shapeshifting Shi'ido, and their protocol droid tutor DV-9, or Deevee. Tash and Zak were survivors of the Death Star's attack on Alderaan as they had been in an off-planet field trip. They were taken in by Hoole, an anthropologist with a mysterious past, who travels the galaxy for his work.

There are twelve books in the series. The first six books deal with the mysterious Project Starscream, a series of experiments in biological weapons conducted by the Galactic Empire. The other six have more independent storylines with the main characters fleeing the Empire as fugitives. One of the series' major gimmicks is guest appearances by major characters from other Star Wars works, from the movies to other novels to video games.

In 2009 Adrian Tolliver wrote Death in the Slave Pits of Lorrd,

or What I Did On My Inter-Term Break, an essay from the perspective of Tash Arranda. Set between Army of Terror and The Brain Spiders, it has the kids wandering Lorrd and finding a wicked plot. Face Loran appears.