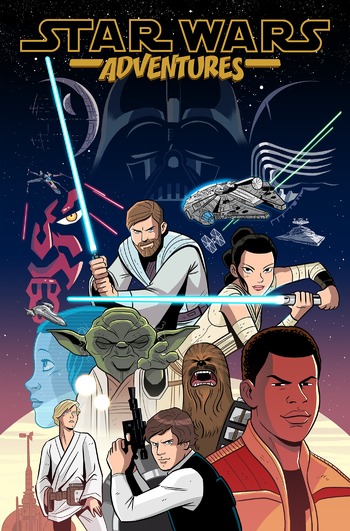 Star Wars Adventures is a series of comic books aimed at "the next generation of comic book fans", written by Landry Q. Walker (Tales from a Galaxy Far, Far Away Volume 1: Aliens), Cavan Scott (Adventures in Wild Space), Ben Blacker & Ben Acker (Join the Resistance), and John Jackson Miller (A New Dawn, & Legends works Kenobi, Knights of the Old Republic comic series, Knight Errant, Lost Tribe of the Sith). Adventures features ambiguously canon stories from before The Phantom Menace all the way up to The Last Jedi, featuring a rotating cast through adventures of different genres and approaches.

A comic book series in Legends, Tales, delved into a similar premise, while the structure and target audience is comparable to its fellow Disney-owned property Marvel Adventures.

Tropes in this comic series include: