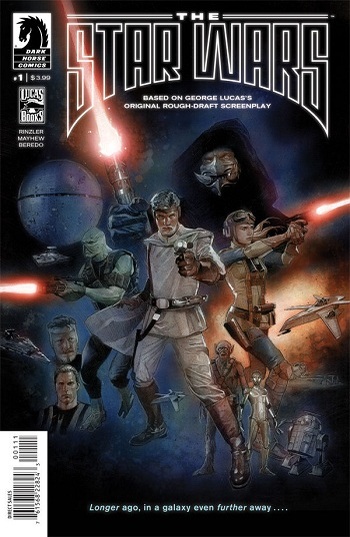 This isn't your dad's Star Wars.
Until the recent GREAT REBELLION, the JEDI-BENDU were the most feared warriors in the universe. For one hundred thousand years, generations of JEDI perfected their art as the personal bodyguards of the Emperor. They were the chief architects of the invincible IMPERIAL SPACE FORCE, which expanded the EMPIRE across the galaxy, from the celestial equator to the farthest reaches of the GREAT RIFT.
Advertisement:
Now these legendary warriors are all but extinct. One by one they have been hunted down and destroyed as enemies of the NEW EMPIRE by a ferocious and sinister rival warrior sect, THE KNIGHTS OF SITH.
—The story's introductory text.

The Star Wars is an 8-issue comic book mini-series published under the non-canon Infinities label of the Star Wars Legends franchise, released in 2013 and later rereleased in trade paperback and as part of Star Wars Legends Epic Collection: Infinities Volume 1. It is a retrospective Early Draft Tie-In that retells the story of the original Star Wars film — based on George Lucas's first draft of the film from 1974.

While the comic shares similarities with the original film, it has a substantial amount of differences, including settings, story beats, characterization, and so on. Abandoned concepts for the first film, like Luke Skywalker as an aged general and Han Solo as an alien reptile with green skin are abundant, as are references to other parts of early Star Wars lore, like the fact that Cloud City was planned to appear in the original movie.