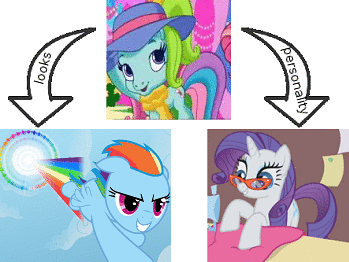 From "fashionably dashing" to "dashing" and "fashionable".
In adapting a work, one sometimes finds there are too many characters to fit on the screen, and some roles can be conveniently squeezed into a single character. Thus the Sidekick, Plucky Comic Relief, and Love Interest might all be the same person. This is the Composite Character.
Advertisement:

More rarely, a creator might choose to break a character apart and spread it over several different characters. In this way, you might end up with several characters who are composites of their previous role with a bit of the decomposed character's role. Alternatively, you could simply end up with two characters, each of whom has parts of the old.

This isn't Literal Split Personality. That's when one character is split into two within the show itself.

This is an example. That is also that example.