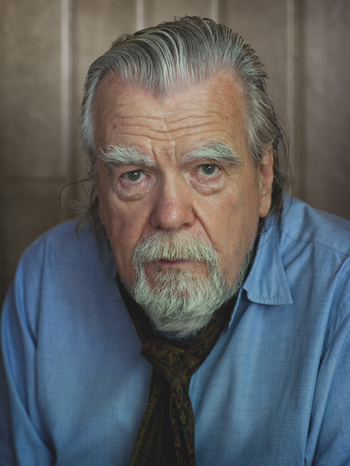 Michael Edward Lonsdale (May 24, 1931 - September 21, 2020) was a French-British film, stage and voice actor. He was equally at ease in French-speaking and English-speaking roles.

He grew up in Paris, Guernsey, London and Morocco. He worked for a radio show as a teenager, then studied stage acting, and in the late 1950s began his cinematic career. He would throughout the next six decades work with such renowned directors as Orson Welles, François Truffaut, Luis Buñuel, Costa-Gavras, Steven Spielberg and more. Mainstream audiences mainly know him for his roles in Moonraker (as Faux Affably Evil villain Hugo Drax), the 1986 film adaptation of The Name of the Rose (the Faux Affably Evil abbot) and Munich (the neither affable nor evil Papa).

He was awarded a César (the French analog to the Oscars and BAFTA) in 2010 for his role as a martyred monk in Des hommes et des dieux, which is based on the assassination of seven monks in Tibhirine,

Algeria. Interestingly, that role involved playing a Saintly Church clergyman, whereas usually, when he played a man of the cloth, it was a fair guess that we were dealing with a Corrupt Church.

Speaking of religion yet again, he was deeply committed to the Catholic faith, the Charismatic Movement