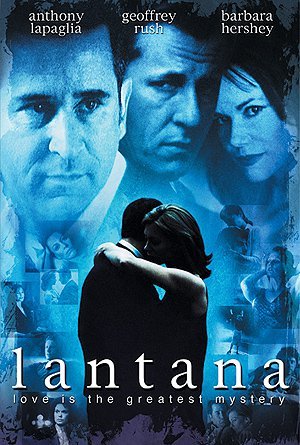 Lantana is an Australian mystery drama film released in 2001, directed by Ray Lawrence and written by Andrew Bovell, adapted from his play Speaking in Tongues. As a Hyperlink Story, it stars an ensemble cast, headlined by Anthony LaPaglia, Geoffrey Rush, Barbara Hershey and Kerry Armstrong.

Lantana is set in suburban Sydney and focuses on the complex relationships between the characters in the film. The central event of the film is the disappearance and death of a woman whose body is shown at the start of the film, but whose identity is not revealed until later. The film's name derives from the plant Lantana, a weed prevalent in suburban Sydney.