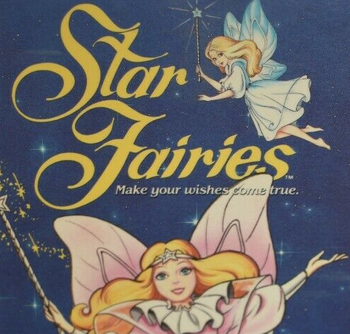 Star Fairies was a group of girl-oriented fairy toys produced by Tonka in 1985, now part of Hasbro. In conjunction with the toys, a half-hour TV special was made by Hanna-Barbera.

The fairy Princess Sparkle lives up in the clouds in Castle WishStar. Sparkle's job is to grant wishes to children who wish upon a star, but lately she has been overwhelmed by the increasing number of wishes being made. The Wishing Well advises her to go to Mount Wishmore and wish on a shooting star. She does so and receives not one, but five new star fairy helpers named True Love, Whisper, Jazz, Spice, and Nightsong.

The fairies grant several wishes, but are stumped when they meet a little girl named Hillary, who is upset but cannot think of a wish to make her happy. Hillary and the other Star Fairies then seek help from Princess Sparkle. When Hillary and the Star Fairies return to Castle WishStar, they discover Princess Sparkle's wand has been stolen by a group of short, hairy elves, and their leader, Bungle Boss, who have also made off with the Wishing Well. This sends them on a journey to recover the wand and save the land before Bungle Boss's misuse of magic plunges it into ruin.