Film / Transformers: Dark of the Moon 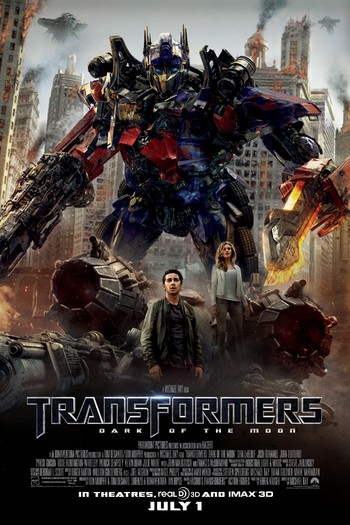 Earth's last stand.
Megatron: Who would you be without me, Prime?
Optimus: Time to find out...
Advertisement:

The third film in the Transformers Film Series, released on June 29th, 2011.

In the waning days of the Cybertronian civil war, an advanced Autobot ship called The Ark is presumed destroyed and lost to the void of space. As it so happens, it crashed on Earth's moon in the early 1960's, detected by the human governments and becoming the actual impetus for the Space Race and the Apollo 11 moon landing. This secret was kept hidden from the Autobots despite their close relations, and the discovery of pilfered tech from the Ark at Chernobyl leads to strained Human/Autobot relations.

The truth is the Ark was carrying advanced technology created and safeguarded by Optimus Prime's mentor and predecessor, Sentinel Prime, which had the capacity to help rebuild Cybertron. However, the Decepticons are already involved in dangerous ways, and that same technology could be used to launch a full scale invasion of Earth and bring them under their control.

The final trailer is here

The film marks Leonard Nimoy's long-awaited return to the franchise note He openly asked to participate in the previous film, but Bay couldn't work up the courage to ask him in after twenty-five years - and sadly his final appearance in the franchise before his death in 2015. Likewise this is the last film to feature Shia LaBeouf as Sam Witwicky. He wouldn't participate in the following two movies that followed.

Has nothing to do with the theatre play Dark of the Moon, originally written in 1942.

Who would you be without these tropes, Prime? (Optimus: "Time to find out Megatron.")

"In any war, there are calms between storms. There will be days when we lose faith. Days when our allies turn against us. But the day will never come when we forsake this planet and its people."