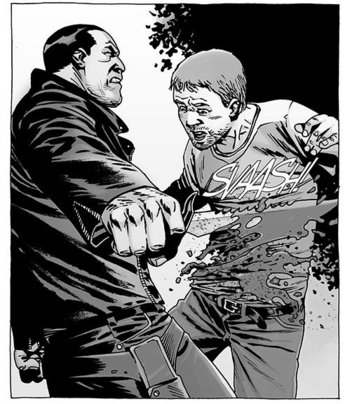 I guess he did have guts- pity they're all over the street now!
Sidney: How do you... gut someone?
Stu: You take a knife and you slit 'em from groin to sternum.
Billy: Hey. It's called tact, you fuckrag.
— Scream
Advertisement:

One of the nastier ways to kill a character that tends to show up in a lot of Slasher Movies. Quite simply, the killer takes a knife or other blade (or if the killer is a monster, its claws will do quite nicely) and slashes the victim's belly open (often from groin to sternum), usually resulting in the poor unfortunate's insides spilling out.

If the gutting is self-inflicted and a matter of honor, see Seppuku.

Related to Half the Man He Used to Be. If the victim is pregnant, a Traumatic C-Section may occur.

While gutting does not necessarily lead to death, the good majority of the examples are deadly, so Beware The Spoilers!