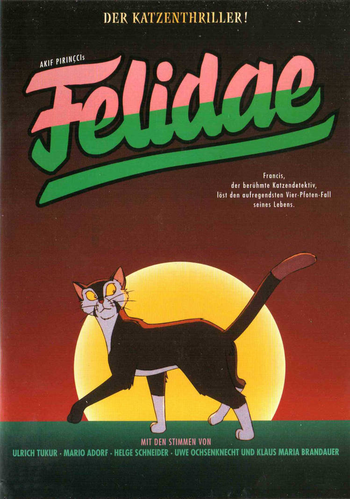 It's Film Noir....with cats!
"Greetings and salutations, friends. Sit back in your seats, look hard, and listen, because I've got a story to tell, and it's not going to be pretty."
— Francis's opening narration. And he's not kidding in the slightest.
Advertisement:

Felidae is the 1994 German animated film based upon a book of the same name by Akif Pirinçci, a German-Turkish author. Thanks to the internet, the film has gained something of a cult status.

The story of Felidae centers on a male cat named Francis as he and his owner, Gustav (nicknamed "Gus" by Francis), move into a new home of unknown location. Upon investigating his new home, Francis not only meets the sarcastic Manx stray named Bluebeard, but he also encounters the body of a murdered cat (as Bluebeard points out, it's the fourth murder that occurred in the past few days). It's not long until Francis begins to unravel the mystery surrounding the murdered cats, a strange cult known as the "Claudandus Sect", and the meaning behind the enigma known as "Felidae."

Despite being an animated film, it is definitely not for kids. The film contains graphic violence, disturbing images, adult language, and cat sex. Yes, cat sex.