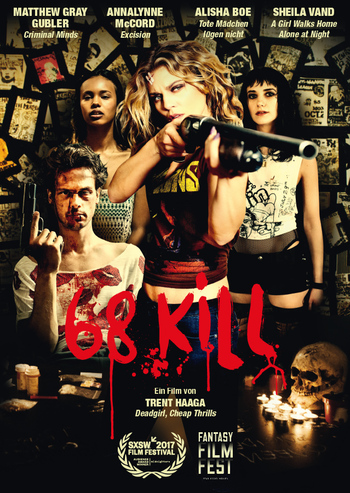 68 Kill is a 2017 American black comedy crime film written and directed by Trent Haaga and starring Matthew Gray Gubler, AnnaLynne McCord, Alisha Boe, Sheila Vand, Sam Eidson and Michael Beasley. It is based on the Bryan Smith novel of the same name.

It started with a couple dead bodies and $68,000 in stolen cash. Chip Taylor's girlfriend Liza had the perfect plan to rip off her rich sugar daddy. It should have been an easy in and out kind of deal. Nobody would get hurt and they would come out of it with enough loot to solve their problems. But things started going wrong as soon as they were inside the rich man's house, and for Chip it was only the beginning of the longest, most terrifying ride of his life.