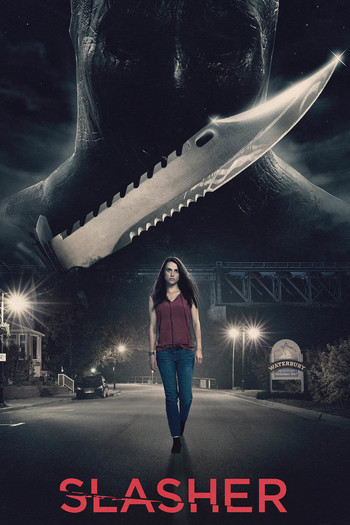 "Everyone in this town has a past. Not everyone has a future."
Advertisement:

The show tells the stories of people being hunted down by masked killers, the identities of whom are unknown. As the people try to solve the mystery of who the killer is, dark secrets start to be unraveled, and trusting others becomes a challenge. Also, every season has a brand new story to tell, similar to American Horror Story.

Season one, The Executioner (2016), follows Sarah Bennett (Katie McGrath) who moves back to the town where her parents were murdered on the night of her birth, coinciding with a string of grisly murders done by a copycat killer, the titular "Executioner".

Season two, Guilty Party (2017), follows a group of camp counselors who return to the site of a murder committed by them, only to find the corpse they'd hidden has vanished, while a mysterious killer hunts them down one by one.

Season three, Solstice (2019), follows a group of neighbors who are targeted by a mysterious killer, "The Druid", apparently seeking revenge on them for their complicity in not saving a murder victim the previous year.

Season four, Flesh & Blood (2021), follows a wealthy family gathering for a reunion on a secluded island, when a masked killer starts picking them off.

Season five, Ripper, follows Basil Garvey (Eric McCormack), a charismatic tycoon from the late 19th century as he oversees a killer stalking the mean streets, but instead of targeting the poor and downtrodden like Jack the Ripper, The Widow is meting out justice against the rich and powerful.

Slasher was originally produced by and for the Canadian network Super Channel, in association with the US cable channel Chiller, who both aired its first season in their respective countries. The series later moved to Netflix for its second and third seasons, and then streaming service Shudder for its fourth and fifth seasons.