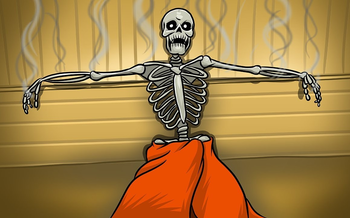 The Hero is trapped in a sauna or steam room by some villain who has locked/barred the door and must get out before dying of dehydration/heat-stroke.

This trope amuses people who are used to real saunas to no end: in any real sauna, because of the tendency of heat to rise up, one can easily lie down on the floor, which tends to remain cool even in the hottest saunas. This might work in a Roman sauna, which uses hypocaustum (underfloor heating) to heat the bath. The Romans used wooden clogs called coturnae to avoid their feet getting burnt.

Similar in ease-of-escape terms but opposite in temperature terms to Locked in a Freezer. Occasionally, when characters of opposite genders are featured, they will be driven to strip off at least the outer layers of their clothing. This generally has an effect similar to the freezer situation in which the characters huddle together for body warmth.

May be used as an example of Homicide Machines.

May be an Amusing Injury in cartoons if the character physically shrinks in size, like a piece of laundry, or becomes skeletally thin from too long in a steam cabinet.

Being trapped or killed in an actual oven falls under Cooked to Death. If the work uses a tanning bed instead, see Trapped In a Tanning Bed.