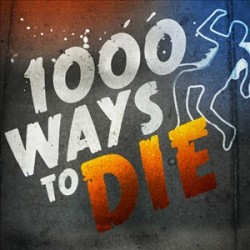 Warning: The stories portrayed in this show are based on real deaths and are extremely graphic. Names have been changed to protect the identities of the deceased. Some of the dead were unlucky. Many were bored. Most were incredibly stupid. Do not attempt to try ANY of the actions depicted... YOU WILL DIE!
"The human body is remarkably resilient. But death is everywhere. Most of us try to avoid it; others can't get out of its way. Every day we fight a new war against germs, toxins, injury, illness, catastrophe and calamity. There's a lot of ways to wind up dead; the fact that we survive at all is a miracle. Because every day we live, we face... A Thousand Ways to Die."
Advertisement:

1000 Ways to Die is Spike's often hilarious 30-minute anthology of people dying in spectacular, gruesome and often stupid ways. Names were changed to avoid lawsuits, but the stories are based on actual events — mostly. Many of the people die because of stupid mistakes, some die as a result of their own misconduct, and some 3rd party innocent victims die because someone else did something so stupid that the poor victim's death probably kept the other stupid person from killing themselves through pure incompetence in being alive. In a lot of these cases, you're not surprised the person died, you're surprised that they lived as long as they did.

At the end of all first season episodes, for the last item, the show is completely inverted, and instead of showing someone dying, they show someone who miraculously survives an event which, under normal circumstances, they should not have lived through. These segments can usually be distinguished by changes in video quality, as they use actual footage taken with personal recording devices at a lower resolution than the show.

Each episode also includes commentary from various experts on the science behind the deaths. The series aired two pilot episodes on Spike in May 2008, with Thom Beers (owner of Original Productions, the company that produces the series) narrating.

Ron Perlman took over as narrator when the first season began regular weekly airings in February 2009; starting with "Tweets of the Dead", "Shotgun" Tom Kelly assumed narrating duties (Perlman's voice is still used in the disclaimer and title sequence) until the show's end on July 15, 2012.

, which are based upon essentially the same thing. The main difference is that the Darwin Awards emphasize the "stupidity" aspect, whereas 1000 Ways usually favors the "got what they deserved" variant (though there's some overlap, as there are a lot of stories on the show in which the victim was killed by their own stupidity).

There was going to be a spin-off, 1000 Ways To Lie, which would have showed how karma bit frauds and cheaters in the butt. The pilot aired only once and the spin-off never kicked off due to negative reception.

1000 Ways to Die provides examples of: