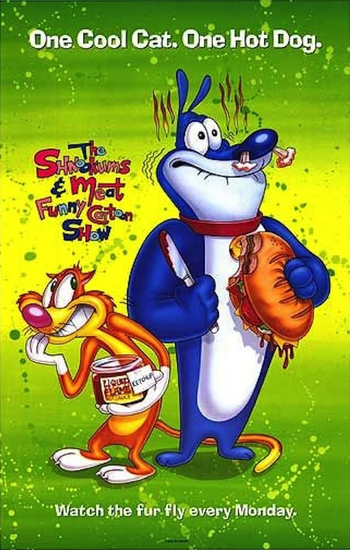 The Shnookums & Meat Funny Cartoon Show, created by Bill Kopp (of Eek! The Cat fame) for Walt Disney Television Animation, debuted in 1993 as a segment Disney's Marsupilami cartoon on CBS, before becoming its own half-hour series in 1995. Each episode was composed of three segments:

At a time when The Ren & Stimpy Show was doing well on Nickelodeon, this similar show was made, presumably to try and duplicate its success. The end result lasted one thirteen episode season on The Disney Afternoon, where it seemed even more out-of-place than Gargoyles, and eventually rerun on Toon Disney before fading into obscurity. Only two comics were made out of it in Disney Adventures magazine.

To those Disney fans who still remember it, the series remains divisive, some calling it a fun experiment for Disney to make something rather different from their past animated works, while others mock it as being Disney's poor attempt at cashing in on a competitor's hot property.